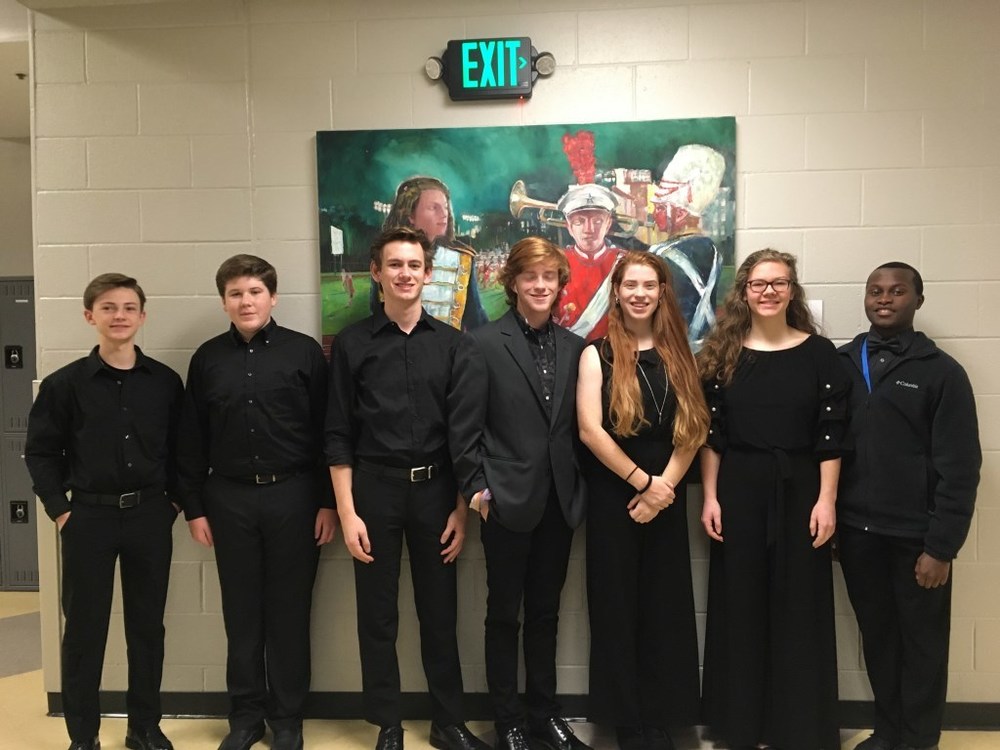 University of Georgia’s “JanFest” (pioneering band invitational established in 1950) is a four-day event for high school band musicians sponsored by the Hugh Hodgson School of Music. Students are nominated for participation by their director and UGA Bands staff selects students to participate based on the order of the director’s submission, the instrumentation need of the festival bands, and the reported musical achievements of each student.
Andrew Cannon, Jon-Henry Ellis, Max White, Eli Humphries, Emma Humphries, Katie Tabb, and Sam Watts (pictured) each auditioned for band placement upon arrival at JanFest.  After the auditions, but before the rehearsals began, participants were treated to a two-hour master class for their specialized instrument.
White’s master class was led by Timothy K. Adams, Mildred Goodrum Heyward Professor in Music and Chair of the UGA Percussion Department.
“It was really an enriching experience learning from such an accomplished percussionist.  It made me feel like a real musician,” said White.
In addition to performing in concerts with their respective honor bands on the last day of the festival, the participants attended a multitude of performances by various UGA ensembles and guest performers from all over the world.
Tabb’s most memorable concert and experience was with the 2020 Special Guest Band from Japan, The Hijiyama Girls High School Wind Orchestra.
“It was so interesting to hear about how they do extra-curricular activities in Japan.  It seemed really student-directed even though the students specialize and do not deviate from their path from a young age,” said Tabb.  “The time that they dedicate to it is incredible.”