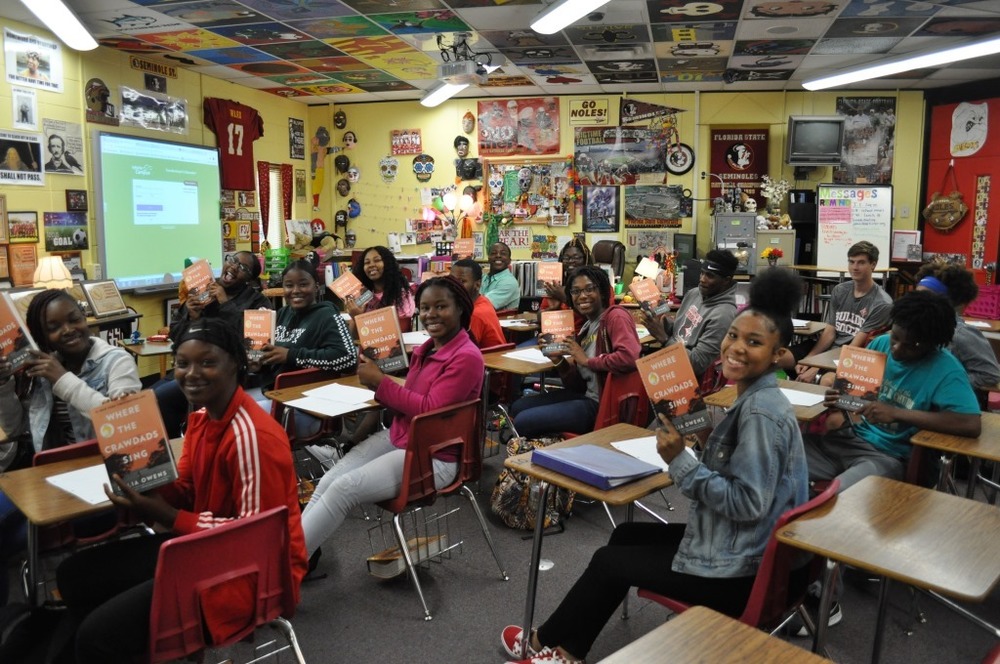 It’s not every day that high school students get to hear the wise words and adventures of a national best-selling author and published zoologist, especially when that guest speaker hails from their hometown!  Delia Owens, author of Where the Crawdads Sing, made a gracious stop at Thomasville City Schools on her whirlwind visit during the Thomas County One Book celebration.

Owens began her intriguing talk describing her reaction to being charged by an enormous elephant named “Cheers” during her years of research and conservation in Zambia.  Owens continued to connect talking about her love for the outdoors rather than the classroom as a child in South Georgia and joked with the students about how she would have loved to miss class for a guest speaker.
Owens followed up to explain that when she arrived in college she knew that she had to get serious about her studies if she ever wanted to follow her dream to study wildlife in Africa.  She received a Bachelor of Science degree in zoology from the University of Georgia and a Ph.D. in Animal Behavior from the University of California in Davis.
During the 10 years Owens spent writing Where the Crawdads Sing, she relied on her observations from her years in Africa. She compared the squabbles between hyenas over territory with neighbors arguing over a fence line.
“Every time I watched wildlife, I saw human behavior,” said Owens.  “If I saw a young male baboon strut by a group of females I thought to myself, ‘I know that guy!’”
Thomasville High School students in Sally Hawthorne’s English class read the book as part of a class project and came with questions they had prepared.
Senior Meazhia Wilson asked Owens to elaborate on how the absence of the main character’s mother at a very early age impacted the child.
“One of the main points of the novel is that we have genetics that set us up to belong to a group,” said Owens. “We feel threatened when we are isolated.”
Senior Braxton Sizemore focused on Owens’s years of conservation by inquiring about the importance of the next generation’s appreciation for fragile ecosystems.
Owens recalled that many of the species she has encountered are endangered and clarified that 45% of mammals are endangered.
“It takes action to save what we have left of what is beautiful on Earth,” said Owens.
In terms of the labor of love that is involved in writing, Owens explained her determination to the students by recounting her disciplined routine of writing daily at 4:30 a.m.  She shared how close she was, solely, with the characters of her novel for 10 years and how exciting it was to hear people talk openly about the main character, Kya, after the book was published.
“I felt like I connected with so many people instantaneously.  It was a great experience to connect with readers,” said Owens.
Senior Zaria Meeks reported that she would like to go back and re-read the book over and over again.
Senior Jamear Lane was drawn in by the mystery that was trying to be solved with the analysis of fibers and other evidence.
“I’m not usually into suspense, but the story was well-connected and seemed realistic,” said Lane.
“It seemed like a friend wrote it or definitely someone who lived through it,” said Meeks.
Hawthorne was thrilled to be able to introduce her students to the literature and was excited for them to have the opportunity to meet a best-selling author.