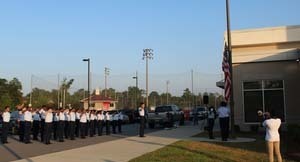 With the sun peaking over the roof of Thomasville High School on September 11, 2019, THS AFJROTC  Cadet Lt Col Jarrett Daniel leads fellow cadets in a salute to the U.S. flag which was raised and lowered to half-staff by Cadet 1st Lt Edward Ford, Cadet Senior Airman Sharmia Bush, and Cadet Major Shemekia Clark in accordance with Governor Brian P. Kemp's executive order in memory of those lives lost on September 11, 2001.  THS band member, Samuel Watts played “To the Colors” as the flag was raised and “Taps” as it was lowered to half-staff. Thomasville Chief of Police Troy Rich acknowledged the memory of all who lost their lives 18 years ago and that the majority of the students at the ceremony weren't even alive on that terrible day. Rich spoke to the gathering of students, teachers and community members about the hard work and sacrifices made by police, fire, and EMT officers every day in our own community.